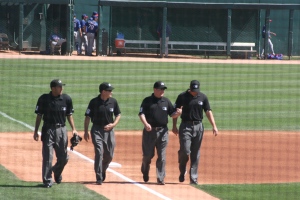 It has been a very interesting first half of the baseball season in 2014 as a couple of things stand out. First, there have been very few umpire disputes that have resulted in the old-fashioned kicking-up dirt and in-your-face heated arguments, spewing high blood pressure to transfer into a blast of spittle upon the face of the beloved ump. Not sure if that is a relief or something we should want back like the ‘No Pepper’ signs on the fence behind home plate. Regardless, the micro view of the slo-mo cameras from the many different angles make today’s baseball look like a reinvention of steam power into the combustible era.

Second is the excitement in several markets throughout America. Seventeen of the teams have officially hit the half way mark in the season. The winningest team in baseball is the Milwaukee Brewers, leaders in the Central Division of the National League. The top team in the American League is the Oakland A’s. There are three areas of North America that are entering the world of delirium. First there is Milwaukee. This week they had a three game series against the Eastern Division leading Washington Nationals and drew over 100,000 fans ON A MONDAY THRU WEDNESDAY time frame. Yesterday’s game was packed to the rafters as they defeated Colorado for the seventh straight game against the Rockies. Surprisingly they rank #8 in attendance with 78.5% capacity. Another area where baseball is king is the Bay Area. Both the San Francisco Giants and the Oakland A’s lead their league’s Western Divisions. Both teams are loaded in pitching. Both teams are very exciting. San Francisco leads the major leagues in attendance with 99.4% of capacity while Oakland, in one of the worst stadiums in the world, is drawing 66.9% capacity. Then there is Toronto. They are in front in a very tight Eastern Division of the American league. With over 6 million people in their marketing area, they are the fifth largest city in North America and the largest on the Great Lakes, surpassing Chicago. They are drawing 54.2% capacity but unfortunately that places them only 26th among the 30 Major League Baseball teams. Only four American League teams rank worse (Chicago White Sox with 50.1% of capacity; Tampa Bay Rays while having a disastrous season at 50.0% of capacity; shockingly the high payroll team in Seattle with only 49.9% of capacity and the Cleveland Indians with 38.8% of capacity. FYI: the lowest team in the National League is the Arizona Diamondbacks with only 54.8% of capacity reached this season.)

Frankly, all of those things are shocking except for Billy Beane’s exceptional overseeing of a team with a huge budget limitation and a continual exceeding above expectation as the A’s continue to drive the Western Division in the American League.

As for Milwaukee, who would have thought that Doug Melvin would have put together a team this good. A critic of his methods, I have to admit through the first half of this season, he should be given the Billy Beane Award for the most Outstanding General Manager of the Year trophy. He has put together a splendid bullpen by trading one of the City’s most favored players, Aoki, for an unknown left hander in Smith, who has performed way above expectation. The first base fix with Overbay and Reynolds was masterful in bringing veteran leadership to the club and a solid defensive and occasional offensive performance day-in and day-out. The revival of Rickie Weeks has given Scooter Gannett the time to adjust to Big League pitching and provided Milwaukee with great depth at second. Khris Davis is continuing to develop as a key player for the team in left allowing Braunschweiger to learn how to play right field and concentrate on something other than the mess he created last season. Then there is Jonathan Lucroy. Pound for pound, he is the best catcher in baseball this season. Offensively, there is no match. In the clutch, there is no match. He is single-handedly taken leadership of the team and molding it into a winner only Melvin could have seen before the season began. Then there is the manager, Roenicke. He has proven that this year, with four right handers and four left handers in the bullpen, he can manage as well as anyone in the game. So far, I am the one who has to eat crow IF he continues to lead the team to victory and the Central Division Championship, the national League Championship and the World Series kings.

But…we are only half way in the marathon that is known as a baseball season.