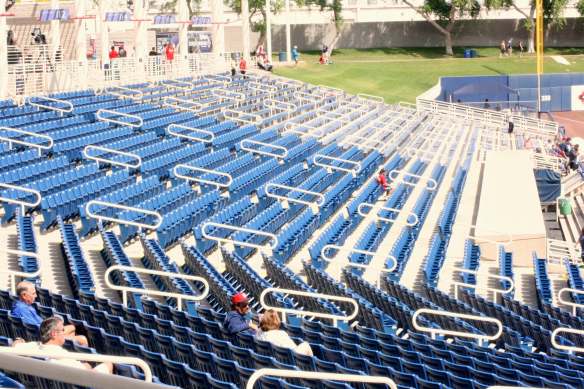 The fun has stopped. The crowds have left the sunny climes of Florida and Arizona one more time as all the practice games are over. The fields are vacant, once filled with the laughter of the guys who bring the summer dreams alive, even the grounds keepers have left as hot dog wrappers tossing ever so softly in the air on the field around the keystone sack. The aisles are empty. No more hawkers loosening their pipes for the trip back up north. The Brewers and the Indians have left Maryvale to allow the real season to begin.

So, now they are all in their places. The rosters have been set. Schafer has made the team again hoping this time he gets his chance to prove he can hit in The Show and stick this time. Scooter will try to hit left handers to see if he can become the permanent second baseman in the shadow of Gaintner’s ghostly past. Lind is a mystery at first but appears to be a good hitter. Surely he will not be able to live up to the expectations of the legend of Prince. Segura seems set to prove the horrible 2014 events are far behind him after batting .305 in the spring. The trusted veteran, Ramirez is ready for his final season at third. He is the epitome of the word ‘veteran’.

Lucroy is ready for another season to see if he can be discovered as the real #1 catcher in the game. Gomez appears to be THE center fielder of the National League as he has groomed his game flawlessly this spring hitting .316. Davis has the breath of Parra on the back of his neck as he battles to prove he deserves the left field spot. And then there is Braun. Once the face of baseball, now he only gains respect in the corners of Cream City. The boys in Pigsville are taking bets on the thumb as they toss down another boilermaker which passes for breakfast. What he did…he did. That will live in his past and be kept in our minds by the writers who will always bring it up like a permanent footnote to his name. But this spring, he has looked like he did before all this happened batting .395 and an OPS of 1.252. Lohse will do what Lohse does…win 14 games. And that won’t do. Of course it is all about pitching. #watchingattanasio

Which brings us to the inevitable…who will win the divisions this season.

In the American League West it will be a fight between the team with the longest name in the history of sports, the Los Angeles Angels of Anaheim Orange County So Cal and the Oakland A’s. And this year, with the best player in the game residing in center field, the Angels will take the crown. He is that good. If you haven’t seen Mike Trout play, he is worth the price of admission. In the Central Division, the Chicago White Sox will be the only winner in Chicago. In the Eastern Division, the Boston Red Sox will again top the standing.

In the National League West, the Los Angeles Dodgers will finally prove that money can buy everything, including a divisional crown. In the Central Division, the St. Louis Cardinals will again be the team to beat. And in the East, the Washington Nationals will demolish the division. Hail to the Nationals.

That is all on paper. Now they take it to the field.

Tonight at Wrigley Field, the game begins for real.