Day after day, night after night, the season lumbers on. The old adage of ‘The Dog Days Of Summer’ is a misnomer as this season has been going down since the beginning of the season for the Pigsville Nine. This neighborhood team is stocked with today’s names of the game, with guys like Cravy, Boyer, Knebel, Marinez, Scahill, Pina, Carter, Villar, Arcia, Broxton, Nieuwenhuis, the Blue’s Brothers lost brother, Jake Elmore and others. Yes, Ryan Braun is still with the team, the only star who remains, and the only player hitting above .300 for the season. Maldonado, Nelson, Gennet and Peralta also are names of familiarity. Each day they face big names on bigger teams. And if you haven’t been paying attention, the Cream City Nine is just a breathe away from the cellar of the Central Division of the National League. Going into Sunday’s play, they are 56-73 with a .434 winning percentage and 26.5 games behind the leader.

After a brief winning streak, Craig Counsell’s team has dropped three straight to the charging Pittsburghers as the second to last month of the season comes to an end. For many, it is way too long to continue through the remaining games. However being very fair, just because there are non-familiar names dotting the box score for the Crew, this does not automatically mean they are not good. You can actually imagine Counsell’s pre-game speeches, pulling from one Jimmy Dugan of the Peaches: ‘All right, everyone, let’s listen up now, listen up. Hey! Something important has just happened. I was in the toilet reading my contract, and it turns out, I get a bonus when we get to the World Series. So, let’s play hard, let’s play smart, use your heads.’

The positivities are a buzz. So let’s follow the Buckminster Fuller philosophy at this point in time. “When I am working on a problem I never think about beauty. I only think about how to solve the problem. But when I have finished, if the solution is not beautiful, I know it is wrong.”

At third there is Perez. Taken off the waiver wire last season from the Detroit Tigers, he possesses the ability to play a host of positions and can hit with power. He was a byproduct of Melvin’s last-ditch effort to rebuild a team before departure. While known for his many bad trades, this acquisition may be a touch of genius. But then again, Georg Lichtenberg once said, ‘Everyone is a genius at least once a year; a real genius has his original ideas closer together.’ Sorry Melvin.

In center is a perplexing individual. Broxton can run like the wind (although to my knowledge, nobody has ever seen wind running). Thus the kerfuffle. He came up 0-for-forever, then got sent down, brought up, sent down again and then brought up again where he discovered that with a brand new batting style (congratulations to the Brewer’s hitting coach, Coles) has turned him into a real good hitter. While often not taking the correct line in chasing down a ball hit in his direction, he could be the sleeper of the summer.

In right, there is the true definition of a journeyman. Nieuwenhuis is simply a Nieuwenhuis. No more explanation is needed. At times he can hit the cover off the ball, especially when he plays at Miller Park. But there are other times when he can commit two errors in a single inning. He’s a Nieuwenhuis. And that spells trouble for the heir apparent in right, Santana. Hurt most of the season, when he got well, he was at home and nobody was going to out hit Nieuwenhuis at home. Thus, he has to wait until September when the team will be on the road for the majority of the closing month. This is another legendary position for the Brewers. Just a couple of years ago, Aoki brought new life to that position. Before him, Hart and Hall, Bichett and Lescano, Moore and even Braun was the center of fan adoration. It’s just one of those positions that endears for the hometown nine. Perhaps Santana can begin to live up to his great anticipated reputation.

In pitching, there is Nelson, Davies and Peralta, all of whom bring hope. While the two righties have struggled to find their top form, it is left hander Davies who has risen to the top of the staff. There is hope with the trio in the days ahead.

While this may look like a rose-colored view of a team which is struggling to remain relevant to a town that is devoted to…country western…err baseball in the summer (nearly 36,000 came out to see the team Saturday night with the main draw a country western singer who gave a concert after the game), it is still fiction. As Tom Clancy stated, ‘The difference between fiction and reality? Fiction has to make sense.’ 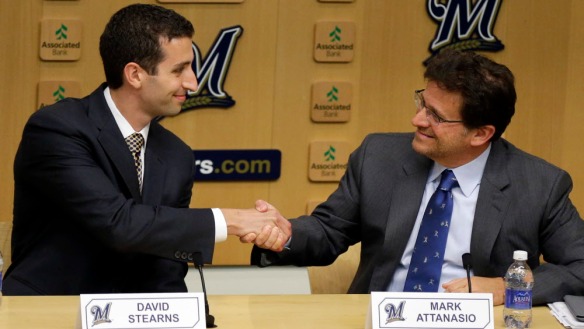 One of the things fans love about baseball is that consistency…consistency in a lineup that you can cheer for…consistency in Milwaukee, where you can play ons-ons knowing how the players perform day-in-and-day-out. It is where the love of the game is imbedded.

For the 2016 edition of the Cream City Nine, consistency doesn’t exist. There are only three players who were in the starting lineup in April of 2015 still on the team. Jonathan Lucroy, the catcher, along with Khris Davis in left and Ryan Braun in right. As of Saturday, there is a new second baseman in Pigsville as Aaron Hill and pitcher, Chase Anderson, who will wear the ball and glove logo traded for the starting shortstop, Jean Segura, to Arizona. That means that it is bye-bye time for Scooter. Gone too is the first baseman, Lind to Seattle; the third baseman went to Pittsburgh; the popular center fielder on Opening Day last year is in Houston. One of the game’s top relievers flew to Detroit. This year’s team will truly be the a ‘can’t tell the players without a program’.

Along with the deal for Segura came starting pitcher, Chase Anderson, who has a penchant for tossing gopher balls. With a hitter friendly stadium like Miller Park, he seems like a strange fit for Cream City.

So what does the starting lineup on Opening day look like at this point?

Lucroy behind the plate.
who’s on first.
Hill at second.
Arcia is a short.
I don’t know at third.
Davis in left.
Somebody’s in center.
Braun is in right.
And starting, who knows.

It’s going to be an interest spring training where hope is all that the Brew Crew has in 2016.

But by the time a team gets to Miller Park in April, one thing is for sure: the brats will be ready with the secret stadium sauce and raw chopped onions and mustard. Along with a cold Miller Light, and a bag of fresh popcorn, there will be a winning lineup in the Cream City this coming season. As for on the field, who cares.

After all, the Milwaukee Brewers have never won a World Series in their history of forty-six seasons. And the current ownership has never won a league pennant.

‘Can’t tell the players without a program’.