During the past two weeks, while most sports fans were watching college basketball’s conference tournaments, the NCAA first round of March Madness, the first night of the second round of March madness, golf from Florida, NASCAR, motorcycle racing, boxing, WWE, the Premiere League, NBA Basketball and NHL Hockey, there was something that was exceptional happening in the world of sport. Some of the best players in the world were playing baseball for their home nations or for nations someone in their family might have a hereditary line, were playing baseball behind a flag. The WBC this year is exceptional.

For those who have been watching these games, from Korea, Japan, Mexico, Miami and San Diego, the game progressed to mid-season form in a hurry.

Last night in San Diego, with everything on the line for the defending champion, Dominican Republic and the United States, baseball was reborn. In front of a packed stadium at Petco Park, the feeling was electric. Could the USA come back and beat the team who had defeated them in Miami after giving up a big lead last week? Could anyone get the tremendous players from DR out? There were 23 All-Stars on both teams for one game. And something happened.

This was big time, Major League Baseball at its very best. The crowd was in it. In fact, the crowd was one of the loudest one could imagine. But, three plays stood out to make this one of the most amazing games you could ever want to see. And perhaps that was the point. You go to a game in hopes that you see something you can talk about for a long time to come. Then it happens. Not once. Not twice. But three times.

The first was the incredible pressure the Dominican team puts on its opponents. There is one basher after another. There is not space to take a breath. And in the first inning, as the home team, they began pounding the ball. But as it again happened in the second inning and the fifth inning, somehow the USA team stopped what could have ended the game as it had in Miami a week before. Solid pitching and solid defense stopped the DR in its tracks. Danny Duffey’s great pitching and a terrific tag of Nelson Cruz at home by catcher Jonathon Lucroy with a fine throw to him by Brandon Crawford, kept DR at bay in Mission Bay. 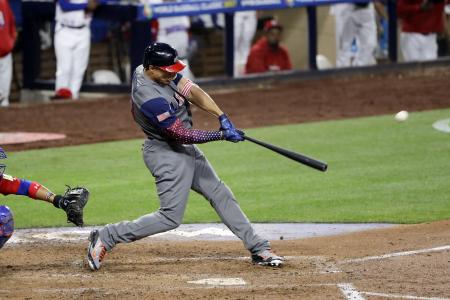 The second was an unbelievable force of one Giancarlo Stanton. The ‘Adonis of Miami’ absolutely crushed a baseball which took off faster than one could imagine to give the USA a huge lift and the lead. An unbelievable speed of a ball being hit into the warehouse in left field went out faster than Staton could complete his swing. If in all the time you spend watching baseball, here is a memory nugget you can keep forever. Wow!

Then the third made this game an important turning point for the game. This WBC showed off big time baseball at its very best. And this is a memory nugget you will never forget. The incomparable Manuel Arturo ‘Manny’ Machada hit a blast to deep center field and as if time stood still in the marine layer, Adam Jones, the centerfielder for the Baltimore Orioles, raced to the fence and leaped way over the wall to make one of the best catches in the history of the game. Electric. Unbelievable. Fantastic. The Golden Memory Nugget. The pitcher mouthing ‘Oh My God’. But it is what happened a moment later that made this the great game and gave rebirth to the new era of baseball. Muchada while rounding first acknowledged Jones great athletic feat by his regular season teammate by doffing his cap to him as he headed back to the dugout on third base. In return, silently while a tumultuous roar of the crowd, tipped his hat in return to his teammate for saluting him.

This is when baseball was reborn in the hearts of the old who love the game, in the hearts of the fathers who take their sons and daughters to the game and to the young people who packed the stadium and watched on television what a great game can be as a fabric of their lives today and into the future.

This is why it is so important.