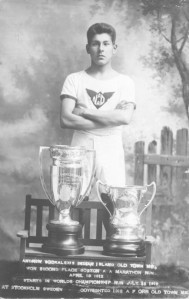 In a piece of land, where war has marked its early life and about 600 today call home, Louis Sockalexis was born. Indian Island, Maine, has a history that goes way back. It is believed the first European to visit the site was probably the Portuguese, Esteban Gómez in 1524.  On Tuesday, October 24, 1871, Louis Francis Sockalexis was born. Not many have heard about him unless you live on the shores of Lake Erie. There, he gave all a lasting legacy.

Louis loved baseball. He was an athlete with great gifts. He first attended Notre Dame but moved back closer to home and attended Holy Cross. It was there the outfielder made his mark.

When he was 25, he broke into the big leagues on April 22, 1897  with the Cleveland Spiders. What happened next was where the legend began. The Detroit Tiger, Hughie Jennings probably said it best. “No other player (besides Louis Sockalexis) ever crowded so many remarkable accomplishments into such a short time.” In that first brilliant rookie season, ‘Chief’ exploded on the scene. Batting .338 with 3 home runs, 9 doubles and 8 triples, he has a slugging percentage of .460. Sockalexis was a full-blooded Penobscot Indian. He soon earned the admiration of Spiders supporters because of his outstanding all-around skill. He could run (note the amount of triples and doubles and the fact that it was noted in news accounts everywhere that he cold run the 100 yards in 10 seconds), field and hit with the best. Before long, baseball fans start referring to the Cleveland team as the Indians. It was the nickname, ‘Indians’ that would be revived in 1915 to become the club’s official name.

Sockalexis played only three years with the team. He had a horrible disease called acute alcoholism, but the skills he showed on the field can be seen today on this glorious day in the Valley of the Sun as the legacy he left upon all of us, as his team takes the field in Goodyear.

December on the 24th, 1913 Louis passed and is buried at St. Anne Church Cemetery in his native Maine.  But on this day in 1897, Cleveland signed the Holy Cross star and today that famous logo is everywhere in the hearts of baseball fans from the land of Erie.