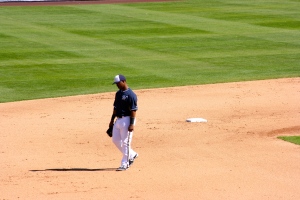 One of the songs waffling in the air during a September in the Midwest is the sound of the crowd at the baseball stadiums. For those who expect to win, the sound is full of excitement. For those who are on the brink of collapse, the sound of pending failure is deafeningly muted in its outburst of last air escaping from a dying effort.

Down by two in the bottom of the night, with two outs and a runner on third, while two rookies tried in vain to deliver a key hit to extend the comeback, there was a crescendo from the crowd lifted by the hope that what might be could happen. But most in the park understood that this is where so few of these epic victories have taken place as the inevitable surly would happen.

Baseball in most cities in the Major Leagues have rarely seen the delight of a championship season. It is the hallowed ground of the Yankees and the Cardinals, the Dodgers and the Giants. Oh, there have been bursts of greatness in Oakland and once in Phoenix, Atlanta has had one and ironically, Miami and Baltimore have seen their share as have Minneapolis and Detroit, Cleveland and Cincinnati. Boston and Chicago, Philadelphia and Pittsburgh, and once years ago by a team no longer in Milwaukee. Even Washington saw it before most people who are alive today were born. But never has the World Championship flag flown in Houston or Dallas, Tampa or San Diego. Seattle has never seen it fly except in other team’s stadiums.

But now in the present era of the game, the team that now occupies a place in the major leagues in Milwaukee has never seen it fly at home. They came close one time when they had won the American League pennant, but never since…some thirty two years ago. And perhaps, after a gallant season where they were in first place in the Central Division for so long, since early in April until Labor Day, another season sounded a possible death knell last night as the crowd silently filed out of Miller Park into the gloom of another failed season’s night. And who else would have silenced the crowd but their brewery town rival from the western edge of the Mississippi River down on the Eastern edge of Missouri.

One has to understand that it will be another long season where the Hot Stove league always brings hope for the next season, where the Cubs could win this next year because they have all of these great young players. But settling back on a cold winter’s night with every next day is pewter gray, the thought will haunt how close the Brewers were to finally raising the crown this year.

But the assembled veterans who made first base their home really couldn’t pull off the power first base as Prince used to do for so many years. Scooter just turned out to be a rookie who couldn’t come through in the clutch while Rickey did an amazing job raising his average with so few attempts at Second. Jean was hit in the face with a bat by a team-mate in the dugout, lost his son in a season to be forgotten by him and all of us who hopes he never has to go through anything like this again. Davis performed OK in his rookie season, hitting with power sometimes when it really didn’t count and in need of an arm to control left. Go Go was just a shade off of amazing before he hurt himself again, and now the team misses his power of excitement and energy. Braun just looked hurt all year, unable to regain the powerful stroke that made him a superstar before his fall from grace. Now, sadly, he is just another ball player. Vonnie continued to pick at the corners into mediocrity where he could no longer blow the ball past the pesky hitters who continued to run the count to full. Lohse  just could not eliminate the one bad inning. Peralta, after an amazingly strong first five months, simply ran out of steam. Garza was a complete waste of a three-year, $50 million contract, no longer capable of being a stopper. Yet maybe there will be hope as Lucroy had a career season along with Maldonado who should be the catcher as Lucroy could solve the first base situation. Fiers was tremendous for the past month and the amazing Aramis was the real pro at third base who delivered with the bat and played a remarkable third, fielding superbly. No one plays the slow rolling grounder to third better.

When the great slump of 9 losses finally ended, the inexperience of the manager was exposed and his coaching staff, praised by the team announcers on television as hard-working, were overwhelmingly inadequate.

And on Saturday as the crowd quietly slipped out of the Miller gates, the field left behind was again witness to another close-but-no-cigar season of fading dreams.

Now the pewter gray days and cold winter nights are surely ahead as we head in the direction of Pigsville. But for the Cream City Nine, this year was better than most and with that as a memory, it is a blessing for those of us who have rarely seen the big flag fly above the place called home.

The Marquette will taste the same at Real Chili. The pepperoni and extra onion pizza will still be sensational at Balistrai’s in Tosa. And the Belvedere extra dry will be blessed at Elsa’s on Cathedral Square. Nothing will change. And the Brewers will miss the World Series Championship again. 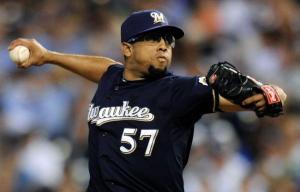 As a kid, the excitement of building something great with an Erector set was held with anticipation. Occasionally, one would build a crane which would carry products from one point to the next, just like the real things did. Then one morning, you came out to find out your brother had done something to which the dreams of building the perfect city would never come to be. The crane’s arm was hanging from a screw…limp and of no more use.

During the past month, K-Rod has come out of the bullpen, night after night, to save another win for the Brewers. The Cream City Nine has seen this before. A Canadian named Axford did it for some 40+ games before the ever present consistency was a thing of the past and all hope was lost. Now the pessimism of ‘when’ looms constantly as we see yet another tight game come down to the point where ‘K-arm’ is up in the bullpen, warming up hard to pinpoint his control on the outside corners before coming in again. It is not ‘how far can he go’. It is ‘when will it end’?

At 18-6 to begin with one of their better starts in their history, these malt and barley men are an interesting lot. A committee of veterans at first, a kid taking over for a vet at second, a miracle with a broken face at short, a heavy hitting veteran at third. A kid in left who is quietly performing within the excitement of the early season. A ball of energy and unpredictability in center…many consider the heart and soul of the ball club, with Braunschweiger in right with a bad thumb, a thing in his shoulder and the gas of millions of outraged fans in every opponents park yet still hitting and fielding like the best. Behind the plate there is the most underestimated catcher in the game with a backup who is now nicknamed ‘The Destroyer’ and a gaggle of starters who may or may not be reaching their peak all at the same time. Then K-Rod.

Francisco Rodriguez first poked his head into The Show in 2002 with the Angels, who were then proudly from Anaheim, for 5 innings and 13 strikeouts. He didn’t get his first save until the next season but on Saturday, in 14 innings so far this season in 24 games, he has 21 K’s and 11 saves. At this rate he will have 74 saves for the season and the Brewers will win 121 games.

His arm will fall off.

But if it doesn’t, with the help of rosary beads everywhere, this is going to be a nail-biting, internal hemorrhaging season of all seasons. But there is one more obstacle ahead. It is called May.

The Milwaukee Brewers in the month of May is like Clark Kent sleeping on a bed of kryptonite. The month begins in Cincinnati then moves home for the perplexing D’Backs and for the first visit in nine years, with the kings of baseball visiting Miller Park. Then on the road with the Cubs, the carpetbaggers and Miami. Then home again with a rare visit from the Orioles and the near weekly confrontation with the Northsiders.

So, the Erector Arm and the Month of May. Hope takes a strange shape this season.